My Role:
As Game Designer for the project, I was responsible for designing the core gameplay mechanics and environmental concept, and coordinating with all disciplines to maintain the integrity of the overall game vision. I balanced weapon and player attributes, designed the overall world map, and drafted and scripted the island configuration sequences. In addition to managing the production pipeline, level streaming, and technical documentation, I also created the central island of the game space.

Players begin with three weapons in Rooty Isles, each with two distinct firing modes. The Vine Saplings act as a grappling hook and provide the primary means of transportation  through the level, in addition to being a powerful precision sniper. The Spore Pods dominate mid range combat and excel at crowd control, dealing AOE damage or stunning groups of enemies in a large area. The T-Rex leg deals a devastating dashing melee attack, and allows players to blast allies across the map, or enemies into the abyss. Combined, these weapons cover a broad spectrum of playstyle archetypes, and give players the means to focus on platforming, allied support, or even combat avoidance, if they so choose. 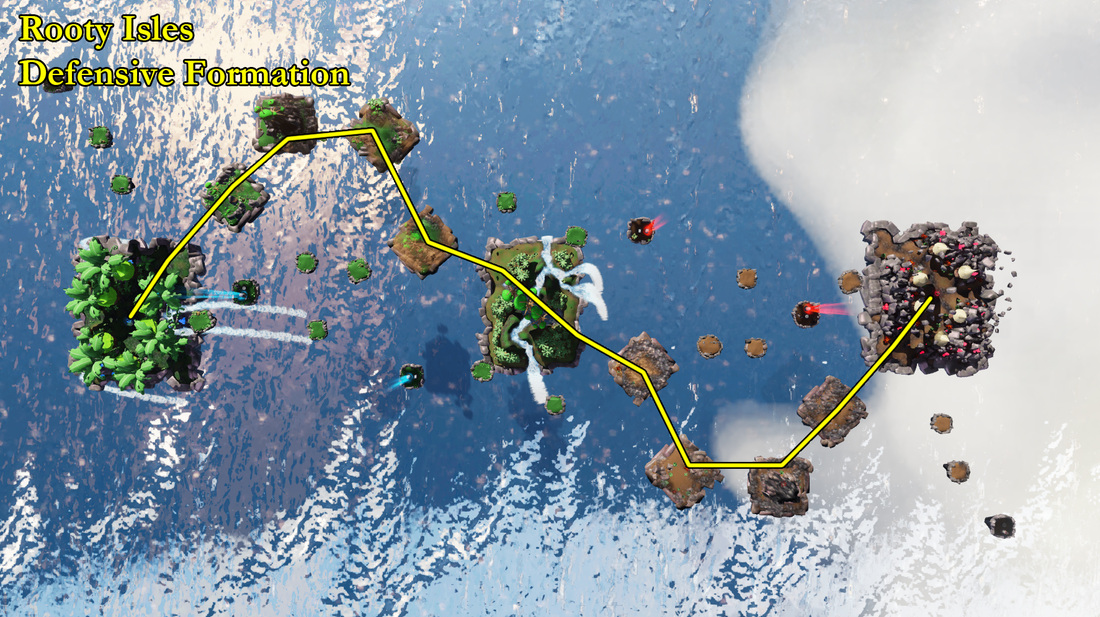 The game begins with both sides in defensive formation. This configuration forces the longest travel path between bases, and gives each base a defensive height advantage between the base and the center island. 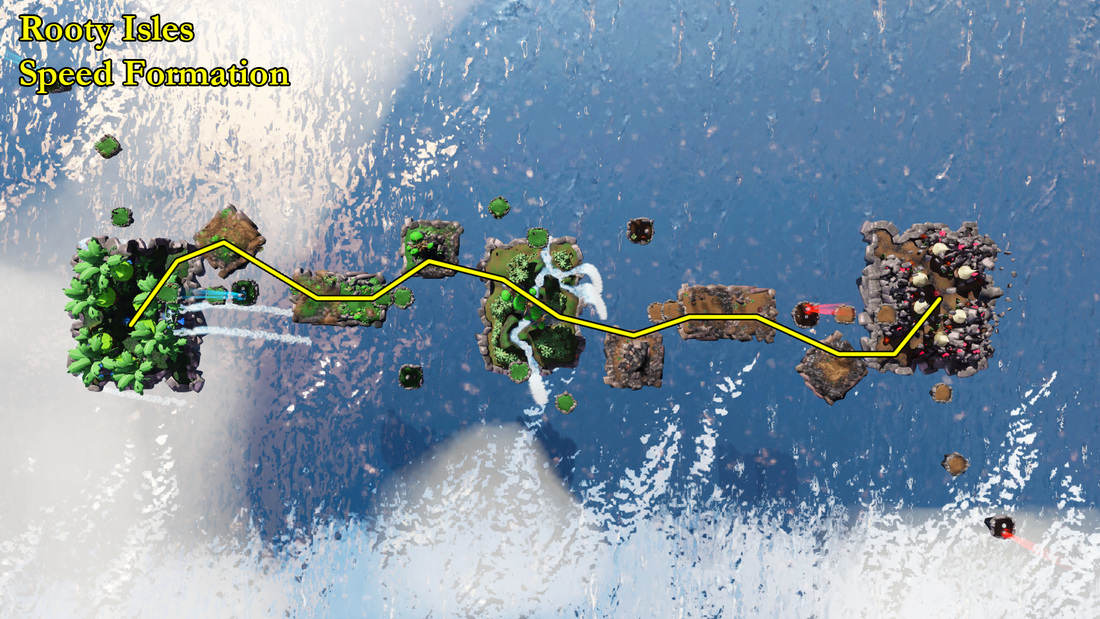 The speed formation lets players rapidly traverse between the two bases. Not only is the pathway relatively flat, but players can ping-pong off the sides of islands instead of running over them, speeding the transition even more. 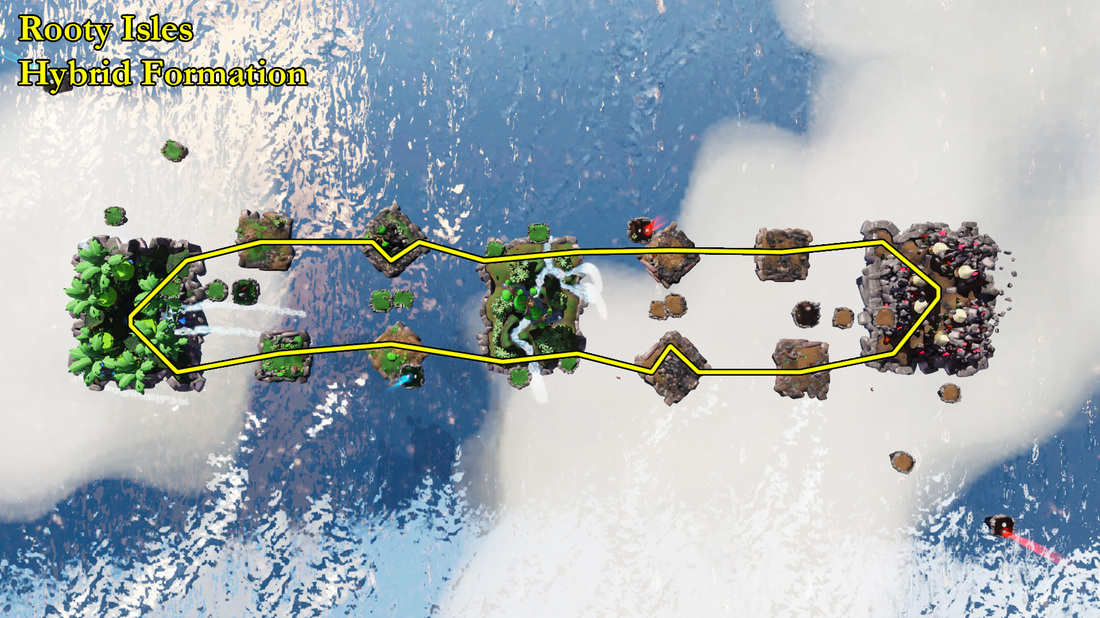 The hybrid formation for each side creates a branching path between the base and the central island. One path is elevated above the main space, while the other is below it, creating a tradeoff between defensive advantage and speed between the two paths. 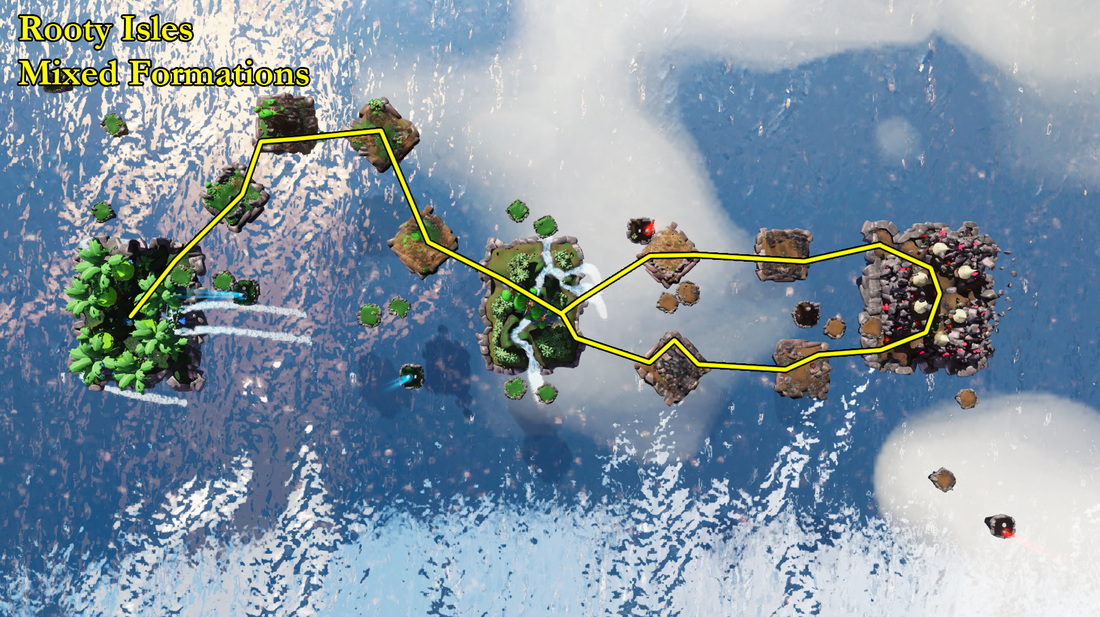 Each side can be configured independently. While the gravity cores that change the island formation are easier to reach from the side they affect, any player can change either side to gain an advantage for his team. 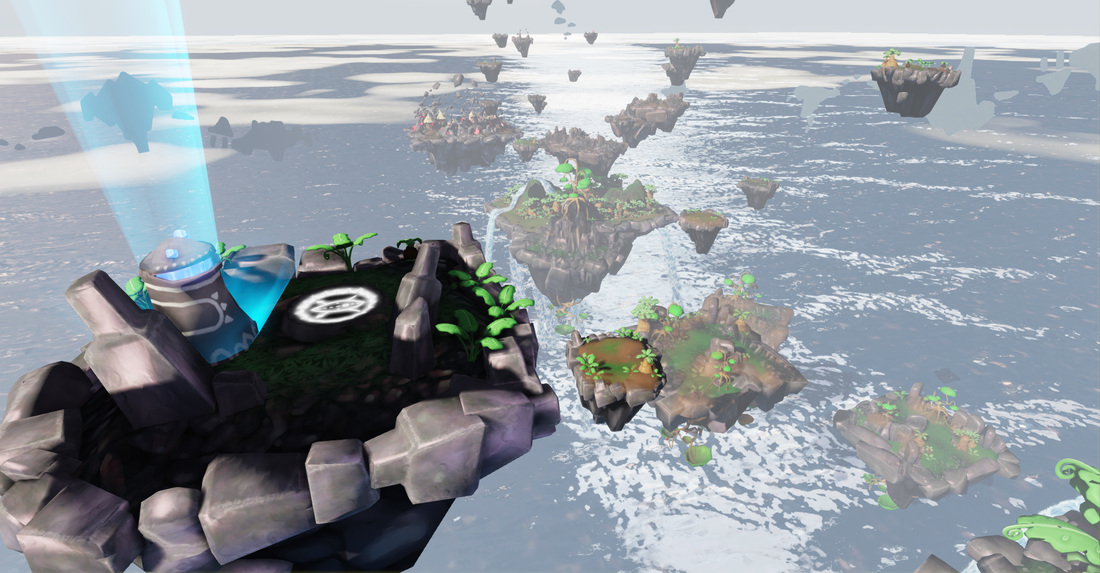 A shot of one of the Saladon Gravity Cores
Each Gravity Core has either red or blue godrays streaming up from its base, depending on which side of the map it is. When the Gravity Core is activated, the godrays vanish and the symbol on the platform blinks, signaling that the islands are moving into the new formation. 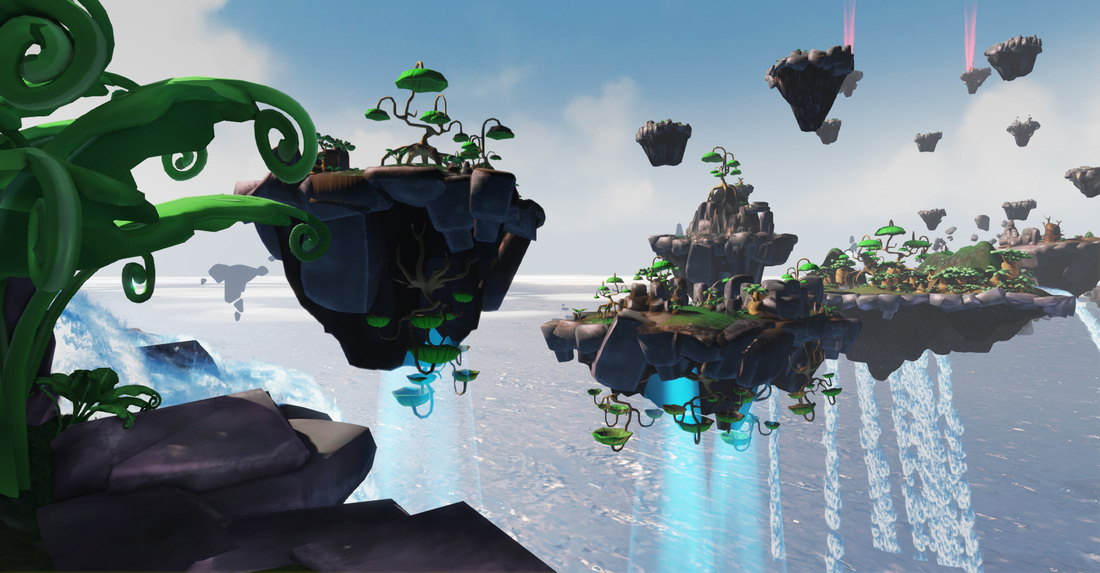 Shot of the Saladon islands moving into speed formation
Godrays of the appropriate color toggle on the major moving islands, drawing a direct link between player action and environmental response. These also give an immediate visual cue to warn players of the impending relocation, giving them time to adjust their path to account for the islands' motion. 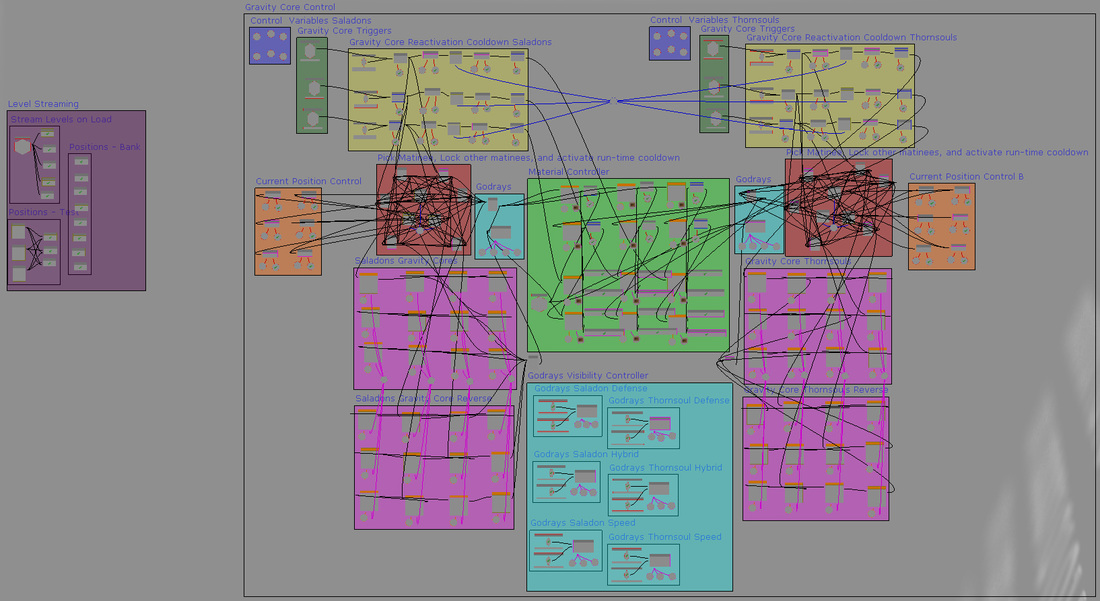 Level streaming and Gravity Core logic scripting
Whenever a Gravity Core is activated, this sequence checks to see what the current island formation is, then moves the islands into the new formation if it is not on cooldown. During the matinee, godrays toggle to denote moving islands and (in)active Gravity Cores. In addition, separate matinees govern material changes on the Gravity Core base pedestal to make it blink, signalling the core is active and the islands are in motion.
This was my first real experience with kismet, and if I were re-creating the above sequence today, I would use switches and compound matinees to make the scripting framework much cleaner and more readable.

Mama Chompsalot Concepts
The assignment for this project stipulated that we create a barrier between the two bases that required a weapon to cross. Initially, we had planned to meet this requirement by creating a large dinosaur called Mama Chompsalot on the center island that would attack players on sight. Players would be able to throw the T-Rex Leg on the ground, drawing away Mama Chompsalot so they could safely dash past.
As soon as we had a working whitebox prototype, I spotted a major flaw with this barrier: players could circumvent Mama Chompsalot by chain grappling through the underbelly of the central island, completely nullifying the game mechanic. Furthermore, we had already met the barrier requirement through the grappling mechanic itself. After considering the time Mama Chompsalot would cost in terms of modeling and animating a dinosaur along with programming the AI and weapon mechanics, I immediately raised my concerns with our Producer. He agreed that we could create a much higher quality game by reallocating our resources elsewhere.
We called a team meeting, explained the issue, and unanimously decided to cut the feature before any major time was lost by the art or programming departments. Not only did this help us make a better game overall, but it helped us build trust and confidence in our team mates, and set a precedent for openly and proactively raising concerns or giving suggestions. 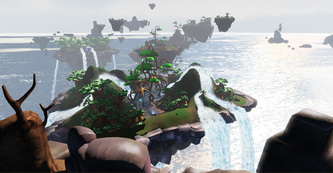 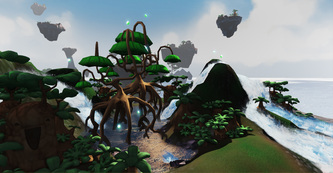 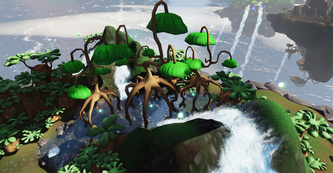 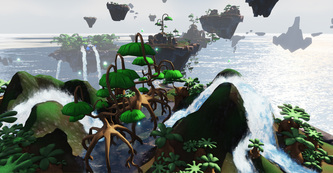 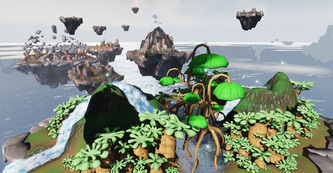 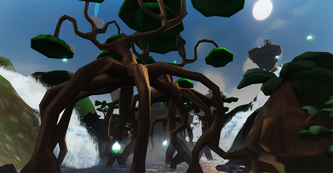 I was responsible for creating the central island in full. The primary geometry consists of two terrain planes for the mountains and underbelly of the island. As the central island of the game, it had to embody the essence of our world theme while creating a clean transition between the lush Saladon areas and the barren desert islands of the Thornsouls. The island contains ample health pickups to replenish players as they move between the two bases. The mountains and large trees create three primary routes through the island, but the Vine Saplings grappling mechanic allows players to create their own paths however they choose. 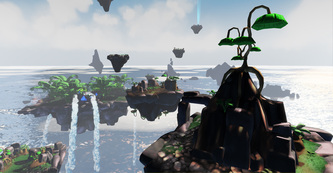 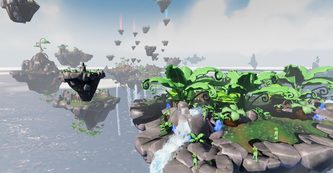 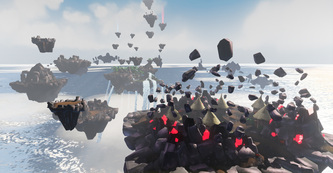 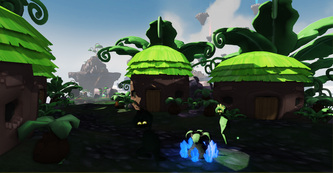 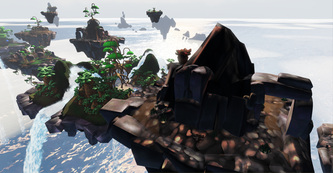 The other areas of Rooty Isles were mostly built by our Lead Level Designer, Producer, and Lead Artist. I was responsible for doing a polish pass, ensuring the world felt consistent and that each area was of equally high quality. Above are select scenes of the Saladon and Thornsoul bases, as well as some of the mid-sized islands bridging the space between the bases and the central island.