Map Type: Scalable Instance (1+ players)
Development Time: 100 hours
Theme/Environment:
Creepy Cave is a Housing Expedition (scalable dungeon) for Wildstar. Players venture into a dark, eerie cave to help researcher Davon study unique forms of life. Inspired by Luigi's Mansion, players use a flashlight mechanic to accomplish a variety of goals as they play, such as finding hidden objects and damaging or disabling enemies while they explore.

Gameplay Description:
Gameplay centers on the flashlight mechanic, which players use to explore and fight within the cave. 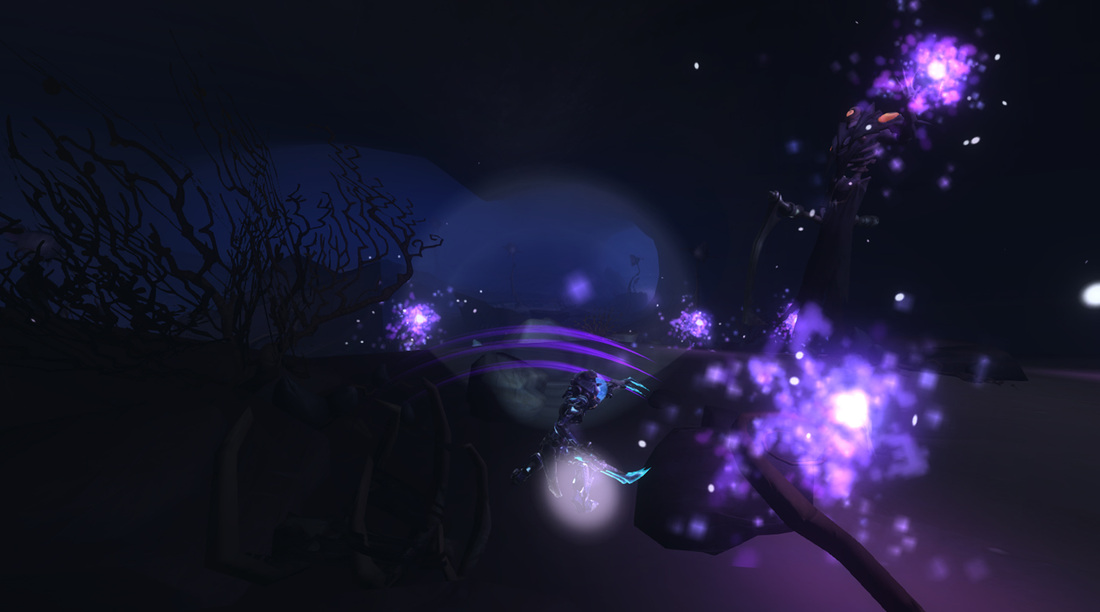 Players undergo Eldan Augmention, replacing their standard abilities with a new set. They must quickly adapt to these abilities to destroy groups of fast moving Eldan Holoturrets.

Reaching into his enemies soul, the Shadow Dweller siphons their life away, healing himself in the process. Players must interrupt this attach or suffer severe damage while healing the boss.

The Shadow Dweller summons six Shadow Bolts at random points around himself. Each Shadow Bolt moves towards the nearest player and detonates when in range, or after a brief time.

Reaching out from the Darkness, the Shadow Dweller stuns his prey and summons a reaper from the void to deal a fearsome slash after a few seconds, damaging all enemies in range.

When the Shadow Dweller reaches half health, he becomes invulnerable, wreathing the entire room in shadow as he summons a Nether Portal. Players must rush to the friendly NPC Davon and his Science Bot and stay within the radius of a protective light. This triggers a phase break in the fight where players must closely follow Davon's Science Bot, staying within its protected light radius while killing Corruption Totems scattered throughout the cave. Meanwhile, Shadow Peeps continually spawn from Corruption Totems and the Nether Portal, forcing players to deal with a continual flow of enemies. After all the Corruption Totems are destroyed, the Shadow Dweller becomes vulnerable and enters his Netherlord Form for the final phase of the fight.

The Shadow Dweller unleashes a eight successive waves of Nether Bolts targeting up to 5 enemies. Each missile hurtles towards its target's initial position and detonates on impact, damaging any enemies within the blast radius. This attack often forces players to stop DPS in order to dodge and survive the onslaught.

Seeking out his most distant enemies, the Shadow Dweller warps to them with a fearsome slash of his scythe, summoning four reapers around the target to deal area damage after a brief delay.

The Shadow Dweller tethers his target and warps to them, dealing damage in a line and summoning a Shadow Bolt to chase and detonate on nearby players. This tether cannot be destroyed, so players must kite within a restricted area until the Shadow Bolt expires.